The Sultan’s Dilemma – A great success! 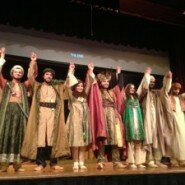 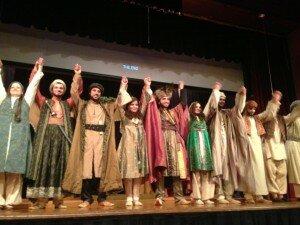 EAD is privileged to be part of the production sponsors and casting team for the performance of The Sultan’s Dilemma in Arabic that took place on April 26-28 at the International House theatre at the University of Chicago campus.  The opening night was nothing short of spectacular and was fully attended by many supporters of Arabic cultural events and performances.

The Sultan’s Dilemma follows an Arabic tradition to write about the modern world in the guise of returning to the past, as a way of presenting a morality play about the preference for the Law over the use of Power (the Sword). The play is set in the medieval past but its moral is addressed to the modern world which al Hakim saw as caught in a dilemma of having to choose between law and the use of brute force to achieve their stated goals.

The Sultan’s Dilemma was performed in Classical Arabic and the cast included native Arabic speakers as well as Arabic teachers from local schools and colleges who learned Arabic through their advanced studies.  The diversity of the cast was resonant in the performance, and the passion of the cast immersed the audience into a different era where philosophical debates were the talk of the town.  It is our hope that this performance and future cultural events like this one help create a bridge of understanding and a wealth of knowledge to share with those who are curious about Egyptian culture and traditions.